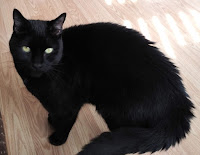 My client, Mr Black, spent two years in the slammer for the crime of Green-Bin-Cracking. The judge released him today when I proved it was the raccoons that did the dirty deed -- my client just happened to be in the wrong place at the wrong time. Now he is living the good life in a safe house with a new identity.

All kidding aside, Mr Black is a six year old male Domestic Short Hair/Mix adopted from AVA -- Action Volunteers For Animals. AVA does not have a fixed place, it puts cats in foster homes where they are prepared for adoption in fur-ever homes. They also have a deal with PetSmart which provides a cat coop where hopeful cats are displayed. Volunteers care for the cats. Mr Black was returned to AVA with four cats from a seven-cat home. The owner was "downsizing". He named all his cats with the letter 'B'. So Mr Black was "B.C." which could mean anything. Best Cat, Bad Cat, Big Chicken .. who can say. Unfortunately, his microchip record name is "BC" which I can't change arbitrarily. So I call him "Bix the Cat" which explains BC.

Bix cried on the way home in the pet carrier but shutup when he realized this was not a trip to the Vet. He was skittish for a few days but is comfortable now. He has an ideal weight of 10 pounds and a glossy coat which does not shed like the layered undercoat that Tabbies have. He circles my chair or jumps on my desk to get attention. Most photos of him look like a shadow with eyes. I got one almost good with no flash and the window behind me.