Since golf clubs are opening soon, the Leafs went on vacation and brought in some beer-league look-alikes to take their place in the playoffs. Just kidding.

The Canadiens could beat the Leafs because they are a big, determined team backed by a super goalie and that team could defend the entire ice rink.  They gave the Leafs little time and space to make plays.  It does not matter what skill the Leafs have unless they have an answer to whatever tactics the other team tries. I only watched a part of game 7 and I saw a lot of small mistakes. Generally, the Leafs were slow and clumsy as if they were in an unfamiliar environment .  Playoffs require a special energy, not just skill.

It is insane to bring in high-salary players just to repeat the games of old. The Maple Leaf organization needs a fresh perspective starting with a name change to one that suggests energy or power.  Consider names like Lightning, Avalanche, Bruins, Golden Knights, or Jets.  They have energy to blow away the wimpy Leafs.  How about a name like Toronto Tornadoes. 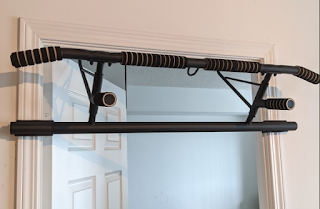 A Doorway Pullup Rack, seen here suspended from a bedroom doorway, is a practical tool for home exercise. Body weight pull-ups and chin-ups, work the arms, shoulders, back, and abs.  This rack comes with optional straps that support easier exercises such as chest and bicep press, flys, and back row. It can be placed on the floor for tricep dips and pushups. 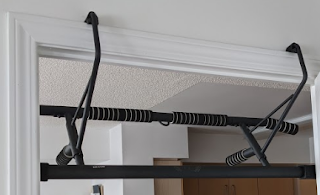 This steel rack can support 440 lbs. The hooks can rotate so that the rack is flat for storage.  There are no screws so the rack can be quickly hung or removed.  The padded grip bar is offset at angle so that a person's weight makes the rack fit more firmly.  Do not do jerky motions or hang from the unpadded bar.