Russia has eleven percent of the world's landmass. It is almost double the size of Canada, China, or the United States but with only half the population of the US. Yet the Putin Regime believes it is necessary to annex or obliterate the land of other countries which were once part of the old Russian empire. But we see that England, France, Spain and other countries have given up most of their colonies, if not all.  Empires are obsolete in the modern world because they cannot be managed and are doomed to collapse.

The Putin Regime allegedly poisons or kills anyone who protests.  There is no free press to call truth to power. There is only propaganda such that the common people do not believe reports from relatives outside of Russia. The Russian Army is apparently the last refuge of brutes and murderers.

I believe Russia does not need more land .. it needs more people.  There are plenty of people looking for a country to live in peace where their families can thrive.  But first Russia must shut down the war machine.  It needs to replace the vinegar of war with the honey of peace.

Vladimir Putin is allegedly about to undergo cancer surgery, with rumors continuing to circulate about his health following Russia's invasion of Ukraine -- Newsweek 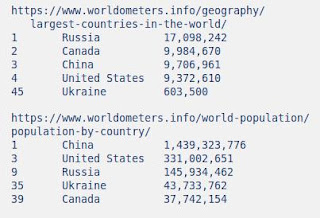 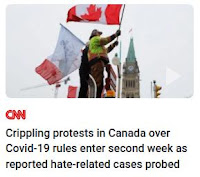 Protesters sometimes gather on parliament hill to express their grievances. Such events are usually peaceful and the people move on after a day or two.  But the current protest in Ottawa is a big mess because the protesters have parked their monster trucks on various city streets.  They make noise and mess which makes life miserable for Ottawa families in the neighbourhood.  The trucker-protesters are making a big mistake because they will get no sympathy from Ottawa citizens who don't deserve the stress from this unusual campaign.
There is no need in Canada to protest for freedom since all citizens have equal rights and freedoms. However, there must be limits on individual liberty such that one persons's freedom does not infringe on the freedom of others.  You can choose not to wear a mask or get vaccinated but then you must isolate yourself.  You are not free to infect other people.
This protest was organised to eliminate the mandate for border-crossing vaccination. But it has attracted all sorts of yahoos waving hate flags and pissing on public streets.  The police are not prepared to handle this sort of unusual protest.  It is not practical to tow away these monster trucks without the assistance of the driver or owner.  The heavy-duty towing companies fear backlash from the trucking companies who are their customers.
_Rights And Freedoms_
at February 07, 2022

Labatt and some other beers have a six month shelf life.  I wrote to Labatt asking how to interpret the date stamped on the box of twelve bottles. It means that the case I bought at the beer store was only two weeks old.

Thank you for taking the time to reach out. I am sorry for the delay in response. We appreciate your patience. Please see below for a breakdown on how to read the label on your bottle of Labatt Blue.

This translates to your beer being bottled on 12/6/2021 at our London brewery. After this date, you bottle has a shelf life of 180, or 6 months, so your beer will be freshest enjoyed before roughly 6/6/2022. Beer is okay to be stored at room temperature or in the refrigerator. The main thing is that you want to keep it stored out of direct sunlight or in heat for prolonged periods of time. Hope this helps clear things up. Let me know if you have any further questions.

It's always a pleasure serving you. Write back any time, and thank you for reaching out to our Contact Centre.