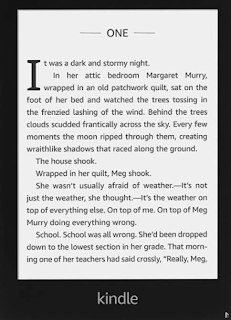 Amazon provides two devices for reading ebooks.  First there is the Fire or other tablet with the Kindle App.  It's pretty good but the display is inferior to the Kindle Paperwhite which has a reflective screen with no glare. It does have a light with five LEDs but they do not shine in your eyes.  They are at the bottom of the screen near the 'kindle' label and they shine across the screen.  They are not noticeable.

The displays of phones and computers have thousands of red-green-blue LEDs. All these LEDs are emitting to produce white which is the default color for web pages.  The blue component is not good for your eyes.

The blue in sunlight provides some healthy stimulation during the day but humans did not evolve to live in constant blue light.  So we should minimise exposure to device screens after sundown so that relaxation and a good night's sleep will follow.

The Kindle does emit some blue light but it is much less intensive than the blue level from phones and tablets.