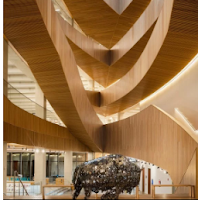 Gillian Steward praised the elegant new Calgary Central Library in the Toronto Star today. It has received international acclaim for it's architecture and for it's welcoming vibe. And it was completed on time within budget.

Such a project would never be done in Toronto because the federal and provincial governments, and the city council would debate forever about who designs, who pays, and when it will be done.