I purchased the high resolution McIsaac Family Crest from House Of Names. Click the image to enlarge it. 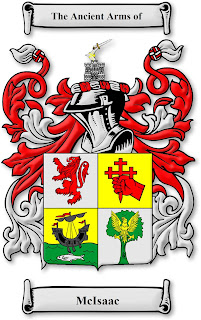 The McIsaac family comes from the ancient Scottish Dalriadan clans of the mountainous west coast of Scotland. The name McIsaac is derived from the personal name Isaac. The Gaelic forms of the name are Mac Isaac or Mac Iosaig, both of which mean son of Isaac.

Spelling variations were extremely common in medieval names, since scribes from that era recorded names according to sound rather than a standard set of rules. McIsaac has appeared in various documents spelled MacIsaac, MacIsaack and others.
at June 18, 2018