These are photos taken on Bantry-Scot intersection of Yonge Street in Richmond Hill, Ontario dated 2021 December 02. This was done to show pedestrian risk that occurs because cars get the green light when walk signals are active.

* Traffic signals and pedestrian signals are on at the same time
* Drivers don't see pedestrian signals (or so it seems)
* Pedestrians consider only the walk signals, not the traffic
* Some drivers are incompetent .. so beware of all
* I have had close calls.

Cars must stop so pedestrians can walk!

The first photo is the north side of Bantry-Scot.  The walk signal is active and cars are going both ways on Bantry-Scot.  These cars also turn on Yonge since there is no green arrow. Two senior people are crossing unseen because of the white SUV turning right.

This is a 2-phase crossing. Pedestrians cannot see cars turning left from Scot to Yonge behind them. And the signal poles in the middle of Yonge tend to block part of the drivers view. 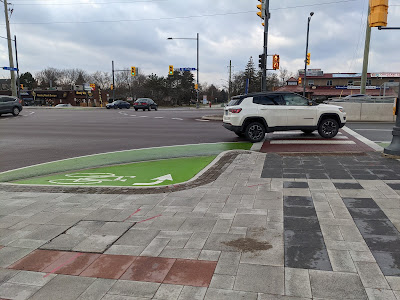 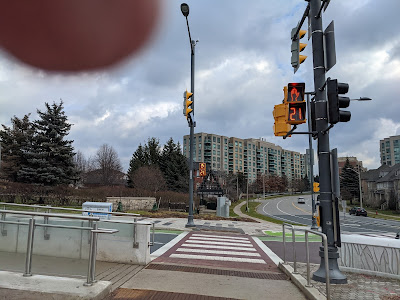 Next we have the Scot-Bantry (south) crossing. The traffic signal is green and the pedestrian is walking because these signals became active at the same time.  The truck can go south on Yonge so he cuts across the crosswalk.  I have had several close calls when crossing this way so I use the North side instead.  Drivers with green light don't see the pedestrian signals because they are not for drivers.  And they tend to get impatient-angry if pedestrians get in the way.  Many of them don't stop completely when they see a pedestrian. Instead they coast through the intersection and pose a threat to pedestrians. 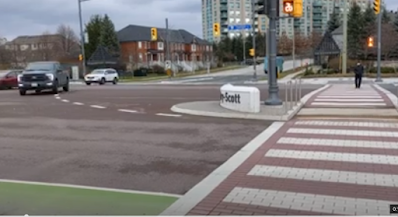 Next we have the Bantry-Yonge east side.  It shows that the crosswalk is perfectly marked so that cars must stop completely behind the crosswalk.  However, some drivers filter out these bold marks on the streets and the pedestrian signals. It's a mystery why they do this.  Cars turning right stop on the crosswalk, or stop behind and creep forward.  They get annoyed when pedestrians respect the walk signals while cars are turning on red.  This is another pedestrian threat. 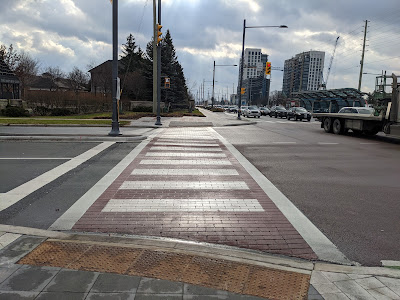 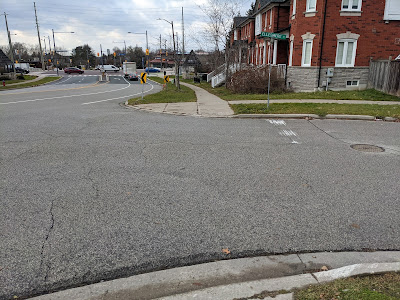