My Onkyo TX-8020 Stereo Receiver from BestBuy has no digital inputs.  It has plenty of old-school RCA jacks for connecting  various music players. It has connectors for two pairs of loudspeakers. And it has an FM radio.  Once upon a time, FM radio sounded like CD quality. Nowadays, the FM channels are compressed to accommodate more stations such that the music fidelity is terrible. So FM is useless.

Now I have an upgrade.  The image shows the NAD Hybrid DAC Amplifier 3045 which is smaller than the Onkyo and has no buttons to fuss with, except on the remote. Don't be put off by it's compact form.  It can drive floor standing loudspeakers with 60 watts per channel.  This is possible with Class-D amplification which is pure digital for more efficiency with less power consumption.  Class-D is relatively new for HiFi products because it is technically challenging to get right.  The NAD 3045 (new audio device) is designed in Ontario Canada and made in China. 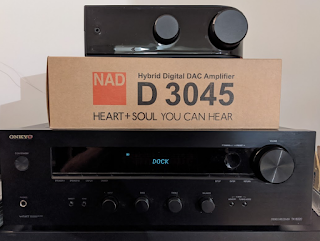 The 3045 has analogue and digital channels. A CD player can be connected  for analogue with shielded cable to the old RCA jacks or for digital with an optical cable.  The analogue solution can pick up noise or degrade signals with long cables.  Digital signals can be sent without loss around the world with a boost here and there. 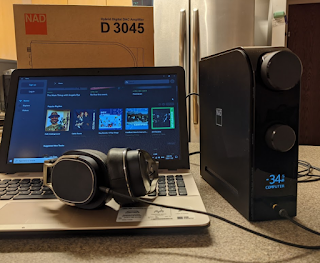 I am considering the Tidal streaming service which has three tiers .. Premium, CD quality, and Master which may be even better than CD.  Premium is lossy but the sound can be pretty good. It mainly depends upon the artist-engineer who recorded the music. With a USB cable between the computer and the 3045, it is digital all the way.

The NAD 3045 is officially supported for Windows 10 and MacOSx.  It works for a USB connection to Xubuntu 20.10 Linux.  I expect it to also work for Ubuntu and Debian. However, it did not work Manjaro which is based on Arch Linux.