Laminate in my kitchen endured for twenty years but yellow spots began to appear in gently used areas near the sink. Laminate has a textured feel which wears smooth to reveal the undercoat layer. So it needed to be replaced with more economy laminate or with a better quality countertop material.
The laminate countertop had a mix of green, grey, and brown of no particular pattern. It looked ok to the eye in natural light but not so good in the photo with overhead fluorescent. Note the diagonal seam in the corner. It was almost invisible when new but it was not waterproof so moisture got into the seam causing the underlying particle-board to swell and the seam to open.

The double sink occupied significant space but was not big enough for a ten inch frying pan. The edges of the sink resting on the countertop required periodic scraping with the point of a knife to remove the crust formed by food residue and water supply minerals -- Toronto has hard water. Clearly the classic laminate countertop has edges and seams where bacteria can thrive. It is non-hygienic. 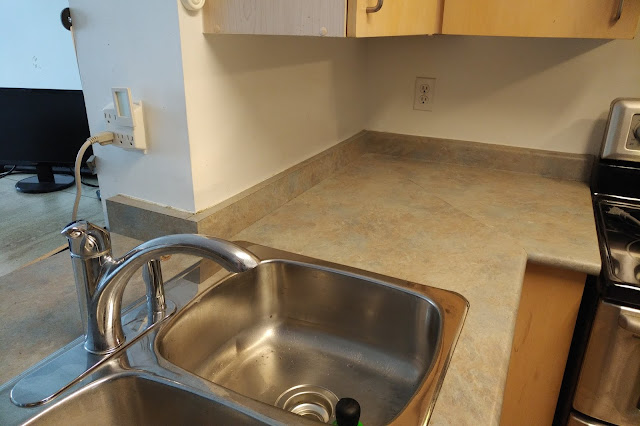 Next up .. Corian Installation
Corian is made of bauxite, from Australia or tropical countries, and acrylic. It can be thermoformed and minor scratches can be buffed out since it is solid surface with no layers. Corian colors come in three groups with the patterned colors costing more. I choose one from group C which is not too radical since a bold color might become tiresome eventually.

Corian has a very smooth surface such that any invisible dirt can be felt and wiped away. I use a microfiber cloth and an easy-spray bottle of water with ten percent Dawn dish soap. No Windex or chemicals. It has improved hygiene with an undermount sink since there are no edges to catch dirt.

I ordered two Corian countertops from Home Depot and
Uniform Custom Countertops. The sink countertop was eight feet long delivered in two pieces which were joined by thermoforming so there are no seams. The undermount sink was glued in place and undisturbed for twenty-four hours. The fit along both walls is perfect with no gaps to complicate eventual tile placement. The tears on the wall were caused by excessive silicon left by the condo builder. They can be fixed. 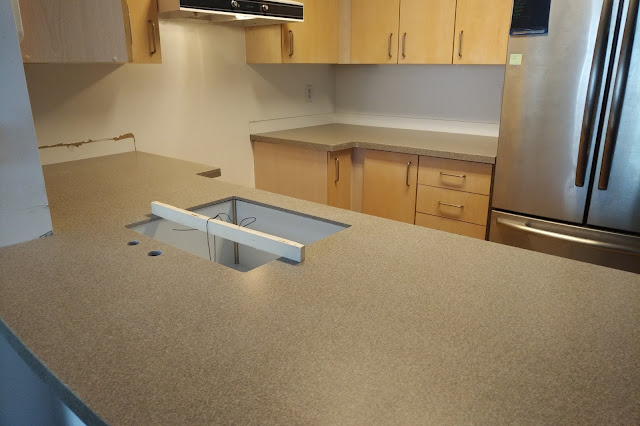 The new sink (color not rendered in the poor light) is smaller in length and width but deeper than the old sink. It seems bigger than the old one and can hold my frying pan. I was dismayed by the leaky plastic drainer supplied with this new sink. I replaced it with one of brass and polished chrome that wasted no space below the sink. 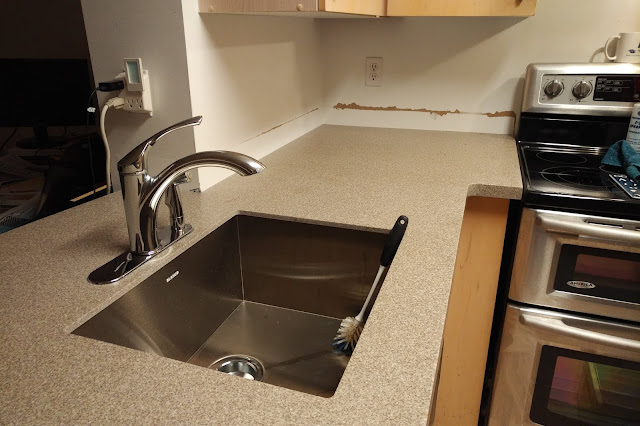 Home Depot had advised me to get a new sink before Uniform came to do measurements but nobody said anything about the faucet assembly. The faucet and side spray is four years old and intended for top-mount sinks. It happens that the faucets designed for hard countertops do not have an escutcheon (base plate). They are slightly wider at the base for a tight fit in a drilled hole. I had assumed that my components would be installed this way. That was not feasible so the escutcheon remains. But it is satisfactory. 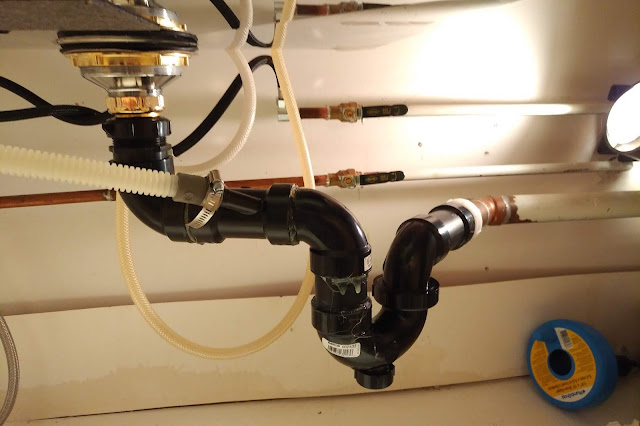 Plumbing was an unexpected problem since the bottom of the new sink is closer to the drain than was the old sink. The drain connection must allow water to flow down the drain while inhibiting back flow and sewer gases. This is done with a p-trap which has the trap inlet (sink output) higher than the drain connection. Fortunately, disaster was avoided because I managed to construct a drain connection with no room to spare.


The builder's economy countertop was constructed of 3/4" particleboard and attached with many screws to prevent it from shifting or shaking. The Corian is thinner at 1/2" and attached with a strong glue. I am told that screws would cause it to crack. The perimeter of the Corian countertop is supported by 7/8" MDF to make it stronger and provide attachment to the underlying structure. However, Corian is stiff, compared to wood, such that a tap on the side will cause a pot placed in the middle to vibrate. To prevent this, most of underside needs to be supported by MDF which is firmly attached to a good structure.

Here is the underside of the Corian by the dishwasher partition. The Corian-MDF sits on the back wall but most of the Corian is floating. It could be improved by gluing a strip of MDF to fill the gap above the partition. 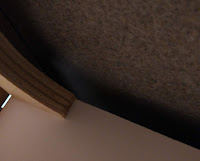 If the gluing of additional MDF is effective, then the vibrations of any countertop activity should be absorbed by the cabinet structure.

Here is the final partition near the wall. The Corian-MDF extends another foot beyond to reach the drywall. So there is a big gap between the end of the structure and the wall leaving little support for the countertop. Some glue is squeezed out of the Corian where the second section was joined. It is not a problem since there is no visible seam in the countertop.

Here is the front below the sink. There are thin strips of wood forming a "T". The MDF is partially visible behind them. These strips are stops for the cabinet doors .. they do not help the Corian. So the Corian above the cabinet doors is the weakest.

The Instant pot with the cover off no longer vibrates when placed in the food prep area to the left of the sink over the dishwasher.